How to Push Through 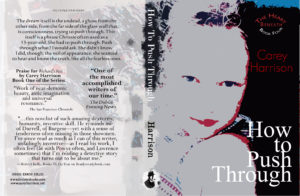 How to Push Through fulfils a promise made to the book by the author more than 40 years earlier, that it would be to the character of Chrissie that we would return at last, in order to complete The Heart Beneath. Over the 48 years of writing and re-thinking the novel sequence, the cast of characters acquired new story-tellers, in particular ‘The Dod,’ Anna-Maria von Doderer, who appears in all four books (and makes further leading appearances in two stage plays and a novel belonging not to The Heart Beneath but to the Justice novel-quintet). It is in this novel – Who Was That Lady? – that the story-teller, Roley Watkins, attends The Dod’s cremation, in Golders Green. Yet in How to Push Through it would appear that at the age of 90 the Dod departs for Costa Rica with her new lover, Inspector Truelove. The two outcomes are not mutually exclusive; neither are the many different accounts The Dod gives, in different works, of her wartime relationship with Adolf Hitler. The author, who listens to The Dod and takes dictation, is of the opinion that the account she gives in How to Push Through is her last word on the subject, and perhaps her most trustworthy.

How to Push Through is told by five female narrators (one of them being a figure invented for a separate novel-within-the-novel by Chrissie herself, the primary and concluding narrator), plus one man who is not, in the fullest sense of the word, a man, but rather a forest creature of indeterminate gender: this is Egon, around whom the entire quartet circles, and who has – if the epigraph’s letter written by Chrissie’s son to his wife is to be believed – the last word, now and forever.